If cranberries are your favorite, well, you’re not alone. It’s been reported Americans eat 400 million pounds of cranberries each year. The love for the little berries manifests itself in different ways. You can snack on dried cranberries, turn them into a vibrant sauce, throw them into baked goods… Furthermore, cranberries are also excellent for your health, with many proven benefits. Want to know more about the many uses and properties of this national treasure? Keep reading! We’ve got answers for you. Keep reading for this ultimate dried cranberries guide.

Cranberries have achieved “superfood” status, with many of its 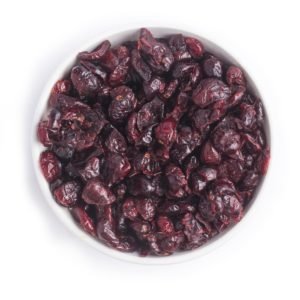 All in all, cranberries have a multitude of benefits. Dried cranberries, in comparison, are best eaten in moderation due to the added sugar. Naturally, dried cranberries are higher in carbs, calories, and sugar than raw berries are. Still, they do still retain many of the vitamins, minerals, and antioxidants found in the raw berry.

According to the nutrition information provided by the USDA, for every 1/4 cup (or 40 grams) of dried, sweetened cranberries, there are 123 calories. Plus 0.4g fat, 2mg sodium, 33g carbohydrates, 2g fiber, 29g sugar, and 0.1g protein.

How are dried cranberries made?

Dried cranberries are made by dehydrating fresh cranberries to remove all excess moisture from them. It’s a similar process to turning grapes into raisins.

Can you freeze dried cranberries?

Fresh cranberries only make an appearance once a year, so if you’re lucky enough to find them, grab a few bags and stash them in the freezer for later.

Dried cranberries, however, are a different story. Available year-round, you can find them pretty much anywhere these days. But if you end up with too much on your hands: yes, you can absolutely freeze them! Pro tip: to stop the cranberries from freezing together in a big clump, spread them out on a baking tray and allow them to fully freeze. It should take around 45 minutes. Later, just pop them into a resealable bag and voilà! When stored correctly and kept in an airtight container, dried cranberries can last for up to a year in the freezer.

Cranberries are safe to feed to dogs in small quantities. They are also a good source of antioxidants and are high in quercetin, a plant pigment that can help boost your dog’s immune system, among other benefits. But keep in mind that dried cranberries often have some sugar in them, so moderation is important when feeding them to dogs. Think of them as occasional treats!

Technically, cranberries are safe for squirrels. Nevertheless, a high amount of sugar is not good for them. So while the extra carbohydrate is welcome to the little guys, be mindful not to give them too many.

If you love cranberries and raisins, why not venture out into the world of less familiar dried fruits? Take a look at our diced apples, sweetened banana chips, medjool dates, crystalized ginger, and dried kiwis. There are numerous ways you can use these to add flair to your daily cooking. Happy snacking!

Other Cranberries We Also Recommend

Get Free Shipping at just $39+

Consuming this product can expose you to chemicals including acrylamide, cadmium and lead, which are known to the State of California to cause cancer and birth defects or other reproductive harm.

For more information go to https://www.p65warnings.ca.gov/food