You love jelly beans, finding them in all kinds of places. They beckon you because they’re cute and colorful. Of course, it’s also impossible to eat just one. Instead, you probably like to savor a handful of those shiny, sweet Jelly Belly jelly beans. They sure are the crown prince of candy, or, maybe they’re more like a rock star!

The jelly bean story precedes that of Jelly Belly jelly beans. Way back in the 1800s an unknown American candy maker created jelly beans. Around the same time the Goelitz Confectionery Company of Cincinnati started cranking out candy corn.

When Was Jelly Belly® Founded?

Many years later, a new and improved jelly bean came along in 1976. David Klein is the savvy fellow who reformulated jelly beans into the Jelly Belly options we now know and love. He managed this by infusing flavor through the center, just like on the crispy outer shell.

Besides that, he created a new story for jelly beans. First, he came up with new flavors, the kind that spark your taste buds along with your imagination. Next, he started calling his treats Jelly Belly in honor of Lead Belly, a great folk and blues musician.

The Jelly Belly jelly bean grew in fame and acclaim when a Florida newspaper referred to Klein as “Mr. Jelly Belly.” The rest is history. Then again, there’s more to this story than meets the eye. You’ll learn that’s true when you buy a bag of L’Orenta 49 Flavor Jelly Belly jelly beans, or one of our many other choices.

Ronald Reagan and the Jelly Belly® Rise in Popularity

Ronald Reagan became a big part of the Jelly Belly story before becoming President. He smoked and used the tasty, mouth-occupying beans to quit. Well, quitting took a while, so Jelly Belly sent monthly shipments to the California governor’s mansion. Reagan now had plenty of flavors that helped him to break his habit.

After a while, he was running another campaign! This time Reagan won the U.S. Presidency. His inauguration featured him 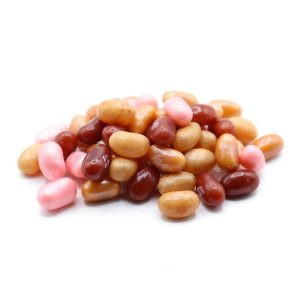 in a sparkling portrait with thousands of Jelly Belly jelly beans. He was right up front and backed by the red, white, and blue! The Goelitz company created blueberry Jelly Belly beans for the portrait’s blue sections. Other Jelly Belly tidbits from the Reagan era are:

Today’s company is Jelly Belly. This came about as a 2001 merger of two Goelitz family companies. With one located in California and the other near Chicago the new Jelly Belly Company increased its profile and sales.

How Many Jelly Belly® Factories are There?

There are three facilities making Jelly Belly jelly beans and the company’s other confections. You’ll find them in:

Are you a tried and true Jelly Belly fan? If so, add this to your list of places to visit in California:

How Many Flavors of Jelly Belly® Jelly Beans Can I Buy at L’Orenta? 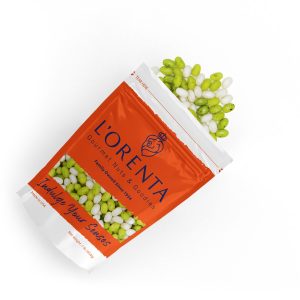 L’Orenta Gourmet Nuts & Goodies carries 50+ flavors of Jelly Belly jelly beans. That’s one flavor for each state! Added to that, you’re sure to find a flavor for each of your relatives, friends, colleagues, teammates, and community fundraisers!

Now’s the Time to Stop  and Shop for Jelly Belly® Jelly Beans at L’Orenta!

Other News We Also Recommend