You might be shocked to learn that peanuts aren’t nuts at all! They’re legumes—the same family as peas and lentils—and they’re an essential source of nutrition and protein in many diets worldwide. So, it’s great to know them well before using them regularly in your kitchen. We are excited to take you through peanuts 101 in this article!

The peanut plant is a flowering plant (genus Arachis) that bears its fruit underground. This makes them different from other legumes, which grow above the ground. They are not nuts but rather a type of legumes. They are also called groundnuts or goobers.

The plants are tall and thin, with flowers that bloom at the top of the plant. They produce small pods that grow below the surface of the ground. The seeds inside these pods are what we call peanuts, and they can be eaten raw or as roasted and salted peanuts.

They were first cultivated in South America and soon spread throughout the world by Spanish explorers. The edible varieties we now eat are descendants of those brought to Africa by way of Brazil in the 1500s, where they were domesticated and spread throughout West Africa.

They grow best in warm climates with well-drained soil and high nitrogen content. They require about 150 frost-free days to produce. Peanut plants can take four months to mature, and during that time, they need a lot of sunlight.

Are Peanuts Good for You?

Peanuts are high in plant-based protein, fiber, vitamins, and 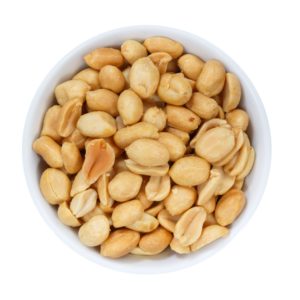 minerals. They are a great source of plant-based protein, with 25.8 g per 100 g, over half of a person’s daily protein requirements. Consuming them in moderation may aid with weight management. They are also good for your heart and lower your risk of diabetes and gallstones.

They contain more antioxidants than many fruits. For example, the primary type of antioxidant found in them is called phenolic acid (also found in apples and strawberries), which can help reduce the risk of chronic diseases such as cancer and heart disease.

Where Do Peanuts Come from?

Peanuts are initially from South America, but they have since been cultivated worldwide. They originated in South America but were brought to Europe by Spanish explorers. They were then taken to Africa by European slave ships, and they eventually made their way to the southern United States via the slave trade.

The four standard peanuts grown in the United States are:

Also Called “ballpark” peanuts, they are large with reddish-brown skins and are often roasted in the shell. They have the highest fat content of all the peanut varieties but are still high in protein.

Spanish peanuts have a reddish-brown skin and are smaller than Virginia peanuts. They have a higher oil content, making their texture drier than other peanut varieties. They have a robust and nutty flavor and crunchy texture, perfect for candy and peanut butter production.

Runners are the most widely produced variety of peanut grown in the United States. They are slightly smaller than Virginias and have a thinner, smoother shell with smaller kernels inside, making them ideal for roasting and growing in sandy soil conditions. Runner peanuts account for about one-third of U.S. commercial production and are used extensively by snack food manufacturers to produce salted nuts, peanut butter, and candies.

Valencias are small in size with bright red skins around each kernel inside the shell and typically contain two or three seeds per pod rather than the usual one to two found in other types of raw shelled peanuts.

How to Make Peanut Butter?

If you have a food processor, it’s easy to make peanut butter. Here’s how:

You can serve it as a tasty sandwich spread, a dip for fruit or crackers, or by the spoonful straight out of the jar. It’s a pantry staple enjoyed by adults and kids alike for generations.

It is one of the best keto-friendly snacks, but it’s essential to choose a brand with little or no sugar added.

It is one of the healthiest high-fat, low-carb foods you can eat on the keto diet. It’s naturally high in fat, which makes it satisfying. In addition, peanut butter contains heart-healthy unsaturated fats and only has three net carbs per serving. It also contains several vitamins and minerals, including protein, vitamin E, B, magnesium, and potassium.

What’s the take-home-point from this Peanut 101? Remember, peanuts are a delicious snack that can also be part of your healthy diet, making them an excellent snack option. They’re easy to carry and eat anytime, anywhere, and low in calories and fat. So the next time you find yourself reaching for poultry or other meat, consider replacing it with a handful of L’Orenta’s peanuts.