Halloween is a popular holiday in North America and some parts of Europe. In Ireland, people celebrate with bonfires and fireworks. In the United States, children don costumes and head out for a night of trick or treating. Mexico, the Day of the Dead inspires introspection about the deceased. L’Orenta Gourmet Nuts and Goodies has just the right candies to celebrate Halloween in the traditional way with a fantastic assortment making up our Halloween Candy Buffet.

Just to get you in the mood for learning all about Halloween, you should try our Gummy Pumpkins, which are chewy and sweet, and come in three vibrant colors, red, yellow and orange; or our Caramel Candy Corn: three colors and a true nostalgic candy treat. Perfect to use for Halloween treats and everyday snacks.

What are the origins of Halloween, and when did people start celebrating it? Halloween is among the oldest holidays in the world because it involves a basic element of the human psyche, the relationship between the living and the dead.

Originating as a celebration of the harvest, and the transition from Summer to Fall, (metaphorically from light to darkness), transformation remains a central theme of the holiday.

Most historians trace the earliest origins of Halloween to Samhain. The name means “summer’s end”, and the festival marked the end of the harvest season and the coming of winter. 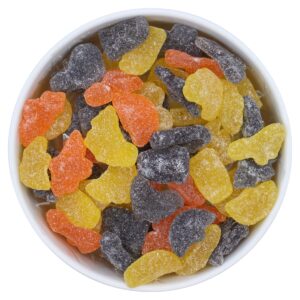 barriers between the living world and the world of the dead could be crossed, and the dead would return and walk among the living.  In fact, it was also believed that many other kinds of spirits, some which never had human form, could also appear. Elves, fairies, and “wee folk”, sprites were just as likely to pay a visit.

One important tradition associated with Samhain is the bonfire. The observance of Samhain included slaughtering cattle, and disposing of the bones in “bone fires” which, in time, came to be known as bonfires.

Before the eve of Samhain, Celtic priests would construct a large fire on a hill in central Ireland that was thought to have an especially close connection to the supernatural realm.  These priests would then distribute embers from the bonfire to the populace.

Thousands of ceremonial bonfires would light up the night, and people would dance around the fires to ward off evil spirits and encourage the Sun not to vanish for the winter.

Catholicism and All Saints Day

By the seventh century, Catholicism had arrived in the British Isles. Rather than banning pagan festivals, the church established Christian alternatives. 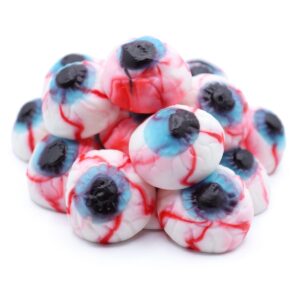 as a time to honor all saints. Soon, All Saints Day incorporated some of the traditions of Samhain. Later, November 2 became All Souls Day. Both were days to honor and pray for the deceased and to attend special Masses.

As the population converted, these holidays absorbed some of the old traditions and sentiment that originated with Samhain. In fact, All Saint’s Day, which used to be called All Hallows Day, gave Halloween (All Hallows Eve) its modern name. 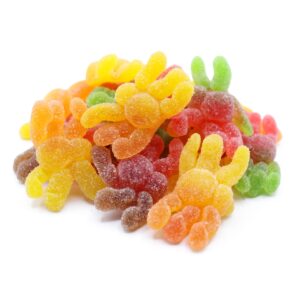 Gummy Hairy Spiders! Multicolored and the perfect combination of sweet and sour.

Colonial America ….not quite there

In colonial times in the United States, the first celebrations included “play parties,” which were public events to celebrate the harvest. Neighbors would share stories of the dead, tell each other’s fortunes, dance and sing.

Irish Immigration and the Start of Modern Day Halloween

The rituals of Samhain, and the real soul of modern day Halloween, arrived in the United States. With the displacement of the Irish in 1845-1849, during the potato famine. The Irish continued to observe All Hallows’ Eve, All Saint’s Day, and All Soul’s Day, but these festivals by now were infused with folk traditions such as the jack o’ lantern.

The original jack o’lanterns were turnips, but immigrants to 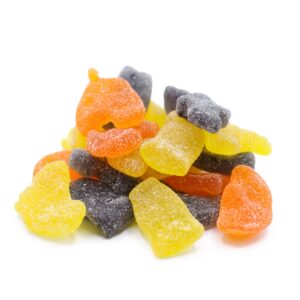 North America used the native pumpkin. Both much softer and much larger, making it easier to carve than a turnip. The American tradition of carving pumpkins was first recorded in 1837. Not becoming specifically associated with Halloween until the mid-to-late 19th century.

The basics of Halloween were now in place with people going from house to house asking for sweet treats. A practice that eventually became today’s “trick-or-treat” tradition.  Trick-or-treating was a relatively inexpensive way for an entire community to share the Halloween celebration.

The familiar tradition of the present day Halloween dates to the 1950s. Today, Halloween is not generally associated with any particular religion or culture, and it is commonly viewed as a secular community holiday, primarily focused on the young, and a boon for businesses offering candy and decorations.

The Essence of Halloween

Transformation is still central to the observance of Halloween. The mask and costume transforms the wearer from their everyday life to another persona. The best-known, and most popular, costumes also touch on transformation. The werewolf is a human who changes into an animal, the vampire can become a bat, ghosts were once people.

A great way to celebrate the essence of Halloween is with the L’Orneta’s Halloween Candy Buffet!  L’Orenta Gourmet Nuts and Goodies has a splendid assortment of Halloween candy  that is perfect for trick or treating on Halloween Eve, or for delicious snacking any time of the year.

Try our Gummy Eyeballs, delicious, a bit creepy but tasty!  These make  the perfect candy for any Halloween  or zombie themed party; or how about our Halloween Spooky Sour Gummies, these bats and coffin shaped gummy candy make a perfect Halloween buffet item. These chewy gummy candies are perfectly sweet and sour