When you like to snack healthy, you know you have to go for treats with nuts in it. On top of their multiple health benefits, they are also delicious and bring crunch to your meals. This guide to butter toffee cashews is sure to give you some fun things about cashews you may never knew!

What are butter toffee cashews? 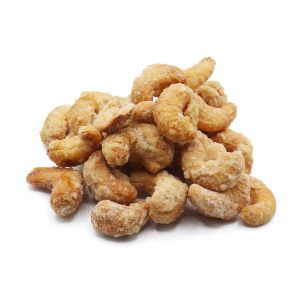 coated whole cashews with a buttery toffee shell. Not only it tastes delicious but they also have a beautiful golden brown color, typical of caramelized sugar and cashew.

This is a very gourmet snack that you can offer to your guests for a beautiful dinner but also a bridal shower or a birthday party. Your guests can grab a handful between meals or as a dessert.

What is the history of cashews?

The cashew was discovered in Brazil around 1558 by European explorers. Initially, they were thought to be inedible because of their irritating shells. As time went on, it became apparent that it was the fruit skin and not the seeds that were irritating. The local native tribe, the Tupi-Indians, proved otherwise to the Europeans. The Portuguese were instructed to roast the cashews to remove the irritant.

Europeans enjoyed eating cashew seeds. Cashew apple pulp, however, was used to make wine. Interestingly, natives had learned to eat cashews from the local capuchin monkeys. They use primitive tools to break the shells off and throw the nuts into a hole.

Around 1560, the Portuguese brought cashews to Goa after discovering how to separate the seeds. In the end, the nut thrived in the new climate and migrated to India shortly thereafter. Cashews became popular after the Indians discovered the nut had healing properties. During the second half of the 16th century, cashews spread to Southeast Asia and Africa. Many countries and cultures depend on cashew seeds for food and commerce.

The Plant can Grow up to 40 feet Tall!

Where the soil is fertile and the humidity is high, the plant can 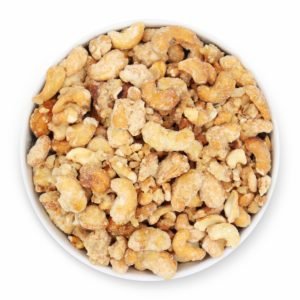 grow up to 12 meters (40 feet) tall. Leathery leaves are spirally arranged and elliptical in shape. The curved fruit, which is not a real nut, is shaped like a large thick bean and can reach a length of more than 2.5 cm (1 inch). It looks as if one of its ends has been forced into a pear-shaped swollen stem called the cashew apple. The cashew apple, which is an accessory fruit, is about three times as large as the true fruit and is reddish or yellow in color. True fruit is divided into two shells. The outer shell is smooth, thin, and somewhat elastic and is olive green until maturation when it becomes pale brown. To obtain the seed inside, the inner shell must be cracked like the shell of a nut.

The seed is enclosed by a double shell of allergenic phenolic resin containing anacardic acid. Anacardic acid is a powerful skin irritant. The resin is chemically similar to the allergenic oil urushiol, which is also a poison ivy toxin. Cashew nuts can also cause allergies in some people. An allergy to the outer coating on the fruit’s skin is much more common.

What are the health benefits of cashews?

Many cultures and countries use cashews and nuts in general for their health benefits.

They contain high levels of unsaturated fats and fibers, but a low level of sugar. They contain significant amounts of copper, an essential mineral for energy production, healthy brain development, and a strong immune system. Additionally, they are a good source of magnesium and manganese, vitamins important for bone health.

How to eat butter toffee cashews?

It is so delicious that you can eat it as is. Add it to a wide range of meals. The nuts provide a satisfying crunch and a delicious taste.

You can add a handful to a salad with romaine lettuce, tomatoes, and olive oil, or to a plate of roasted green beans. You can prepare them in the slow cooker with rice, chicken, and soy sauce!

Make a trail mix with these nuts, dried fruits, and chocolate chips for your sweet recipes. They are also great in granola and yogurt.

How to store your butter toffee cashews?