Family Owned and Made with L'Ove Since 1934
[email protected]
hell[email protected]
Wishlist
Account
Sale
My Account
Wholesale
FREE shipping on orders over $69!
Orders totaling $69 or more (before tax) ship free. Orders below $69 require payment for shipping. The price of shipping is available in Checkout. This offer does not apply to Bulk, Grab N Go, or products that are already marked down. This offer can not be combined with other offers. Address must be within the contiguous U.S.

Are you interested to know 15 fun facts about cashews? The cashew is a nut that grows at the end of the cashew apple and has the shape of a boxing glove. You can purchase cashews raw or roasted, salted or unsalted if required. You can try L’Orenta’s roasted and salted cashews for a taste of authentic roasted and salted cashews. Cashews, unlike other nuts, grow on the outside of the apple, hanging from the bottom. The cashew apple is a fruit that grows on the cashew tree, which is found in northeastern Brazil.

It’s understandable if you believe cashews are simple to prepare and cannot be used in any dish. However, this is not the case! Our butter coffee cashews and wasabi soy cashews are both delicious. They will not only tantalize your taste buds, but they will also brighten your day!

The tree, which is native to northern Brazil, was brought to India by Portuguese sailors between 1560 and 1565.

The informal term for the nut is caju, which is derived from the 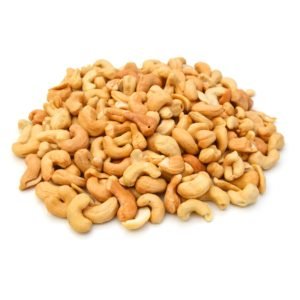 Portuguese name. It receives its English name from “caju,” the Portuguese term for the cashew tree’s fruit, which is derived from the Tupian word “acaju,” which means “self-producing nut.”

The United States consumes more than 90% of the world’s cashew harvest. Cashews are primarily used as a high-end snack in their countries due to their rich and buttery flavor.

The tropics, both dry and rainy, are perfect for cultivating cashew trees. The optimal temperature during the day is 77°F, and the temperature at night should not fall below 50°F.

Cashew nuts are typically eaten “raw,” which implies they’ve been 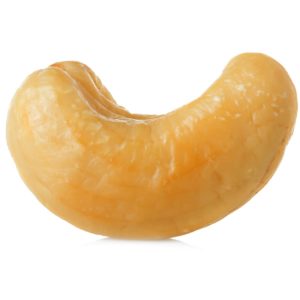 heat-treated, roasted, salted, and used as a spread or in salads. Cashews are widely utilized in Asian cuisine, particularly in South and Southeast Asia. They’re a common element in many southern Indian chicken and vegetarian recipes.

A kidney-shaped drupe emerges at the end of the cashew apple and is the real fruit of the cashew tree. The pedicel extends to create the cashew apple once the fruit develops on the tree. A single seed, sometimes referred to as a nut in the culinary sense, is contained within the tree fruit. Cashew trees flower during the dry season (winter) and can be harvested a few months later.

The cashew apple will be a lovely red hue (occasionally pink or yellow) and the nutshell will turn dark grey when the nut is ready to be harvested. When the fruit falls from the tree, it is clear that it is ready to be picked.

The cashew tree is a member of the Anacardiaceae family, often known as the sumac family, and grows to reach 32 to 50 feet tall on average.

Because cashews are covered by a poisonous oil comparable to anacardic acid or urushiol that can irritate the skin, they are always roasted, boiled, or steamed before being deshelled. Cashews are high in dietary iron, which is necessary for transporting oxygen throughout the body and supporting enzyme and immune system function.

Before being roasted, cashews are usually a shade of green. The 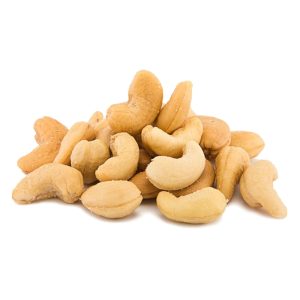 cashew apple can be eaten raw, cooked in curries, fermented into vinegar, or fermented into an alcoholic beverage. In some countries, including India and Brazil, it’s also used to make preserves, chutneys, and jams.

Avoid cashews if you have gallbladder problems or kidney stones since they contain oxalates, which can aggravate your condition. But copper is abundant in them, which aids in the metabolism of iron, the creation of red blood cells, and the maintenance of bones and the immune system. It’s also essential for the body’s neurological and skeletal systems.

Cashew butter and cheese can be made from cashews. Cashew tree leaves or bark can be put into a beverage to treat diarrhea in traditional Mayan medicine.

Cashews are high in protein and include vital elements such as copper, calcium, magnesium, iron, phosphorus, potassium, and zinc. Vitamin C, vitamin B1, vitamin B2, vitamin B3, vitamin B6, folate, vitamin E, and vitamin K are also present. Cashews also contain a significant amount of oleic acid, an omega 9 fatty acid.

So there you have it: 15 fun facts about cashews. Cashews are not only good for your metabolism, but they can act as a catalyst in your daily delicious recipe! In addition, we now know several interesting facts regarding cashews. Make sure to incorporate our cashew from L’Orento into your diet. Eat a balanced diet!